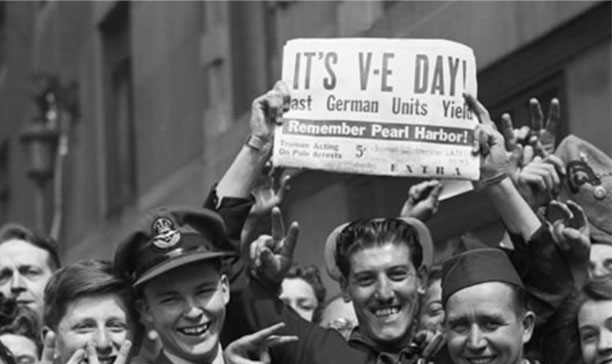 Today is the anniversary of Victory in Europe Day, or VE Day.  This day is celebrated on May 8 of each year to signify the formal acceptance of Nazi Germany’s unconditional surrender to the Allies at the end of World War II.

May 8, 1945 is known as the day the Allies of World War II formally accepted Nazi Germany’s unconditional surrender of its armed forces. The formal surrender of the German forces occupying the Channel Islands did not occur until the next day, thus marking the end of World War II in Europe. The term VE Day existed as early as September 1944 in anticipation of the Allied victory.

Upon the official defeat of Germany, celebrations erupted throughout the western world. From Los Angeles to Moscow, people took to the streets to celebrate. Massive celebrations took place that day in Chicago, Los Angeles, Miami, New York’s Time Square, and elsewhere around the country.

In the United States, the victory happened on President Harry Truman’s 61st birthday. He chose to dedicate that victory to his predecessor, Franklin D. Roosevelt, who passed away of a brain hemorrhage less than a month earlier. Truman said of dedicating this victory to Roosevelt’s memory and keeping the flags at half-staff that his only wish was “that Franklin D. Roosevelt had lived to see this day.” Truman later said the victory made it his most enjoyable birthday.