The War of 1812 was a conflict fought between the United States, the United Kingdom, and their respective allies from June 18, 1812 to February 18, 1815. From the outbreak of the Napoleonic Wars in France, Britain had enforced a naval blockade to choke off all neutral trade to France, which the United States contested as illegal under international law. To man the blockade, Britain captured and forced American merchant Sailors into the Royal Navy.

The anti-British sentiment in the United States was inflamed by the Chesapeake-Leopard affair, then in 1811, the British were in turn outraged by the Little Belt affair where 11 British soldiers died. Britain then supplied Indians who raided American settlers on the frontier, which hindered American expansion and provoked even more resentment. After heavy pressure from Congress, President James Madison signed the American declaration of war into law on June 18, 1812. With most of its Army in Europe fighting Napoleon, Britain adopted a defensive strategy. American prosecution of the war effort suffered from its unpopularity, especially in New England. American defeats at the Battle of Queenston Heights and Siege of Detroit thwarted attempts to seize Upper Canada, which improved British morale.

American attempts to invade Lower Canada and capture Montreal also failed. In 1813, the Americans won the Battle of Lake Erie, gaining control of the area, and defeated Tecumseh’s Confederacy at the Battle of the Thames, securing a primary war goal. One final American attempt to invade Canada was fought to a draw at the Battle of Lundy’s Lane during the summer of 1814. At sea, the powerful Royal Navy blockaded American ports, cutting off trade and allowing the British to raid the coast whenever they pleased.

In 1814, one of these raids burned the capitol at Washington, DC, and Americans later rebuffed British attempts to invade New England and capture Baltimore. At home, the British were facing increasing opposition to wartime taxation and demands to reopen trade with America. After the abdication of Napoleon, the blockade of France ended and Britain ended the impressment of American sailors. The British were then able to increase the strength of the blockade on the U.S. coast, thus annihilating American maritime trade and bringing the United States government to near bankruptcy.

Neither side wanted to continue fighting so negotiations began in August of 1814. The Treaty of Ghent was signed on December 24, 1814, but news of the peace took some time to reach America. Unaware of the treaty, British forces invaded Louisiana and were defeated at the Battle of New Orleans in January 1815. These late victories were viewed by Americans as having restored their national honor, leading to an end of the anti-war sentiment and the beginning of the Era of Good Feelings, a time of national unity.

Shortly thereafter news of the treaty arrived in America, halting military operations. The treaty was then unanimously ratified by the United States on February 17, 1815, finally ending the war. 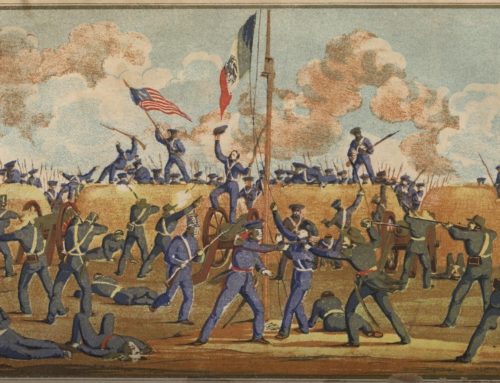