The United States declared war against Spain on April 21, 1898 following the sinking of the USS Maine in Havana Harbor on February 15 of that year while at the same time supporting the ongoing struggle of Cuba, Puerto Rico, and the Philippines against Spanish rule. This would be the first war the United States would fight overseas, involving campaigns both in Cuba in the Caribbean and the Philippines in the Pacific. The majority of U.S. soldiers were volunteers from all over the country to take part in “a splendid little war,” as Secretary of States John Jay called it. 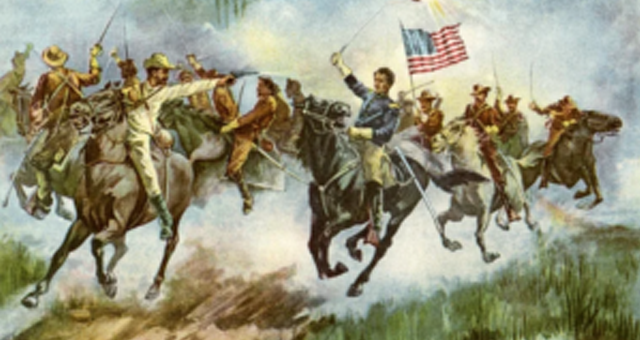 War broke out in Cuba in June when the Marines captured Guantanamo Bay and other troops landed at Daiquiri and Siboney, followed by other attacks by U.S. troops on San Juan heights on July 1. Dismounted cavalry troopers, including the Rough Riders commanded by Lieutenant Colonel Theodore Roosevelt and the African-American Ninth and tenth cavalries fought against Kettle Hill while Brigadier General Jacob Kent and his forces charged up San Juan Hill and pushed the Spanish troops inland while also inflicting 1,700 casualties. The United States Navy, under the command of Commodore George Dewey, defeated the Spanish fleet guarding the Philippines on May 1, 1898. Not realizing this defeat, President McKinley authorized the assembling of troops in order to mount a campaign against the capital of Manila. 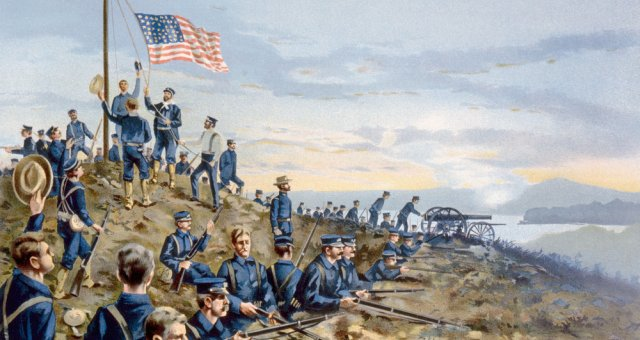 The war ended when the Treaty of Paris was signed on December 10, 1898. This war established the independence of Cuba, transferred Puerto Rico and Guam to the U.S., and allowed the U.S. to purchase the Philippines from Spain for $20 million. The war cost the U.S. 3,000 lives, mostly from yellow fever, typhoid fever and other infectious diseases, and $250 million.