Home/Living History/History of the Army’s Helmet – From Steel Pot to IHPS!

History of the Army’s Helmet – From Steel Pot to IHPS!

Armies have been wearing head protection for thousands of years, from as far back as the gold helmet of the Sumerian King Meskalamdug of the First Dynasty of Ur (26th-25th century BCE).

Also made of bronze in that day, the helmets were designed to protect warriors from arrows and swords, were heavy and fit poorly, but they worked for the most part.

The road from then to now as displayed in many military museums is filled with a trial-and-error process leading to the development of many different helmets, each a little bit better than the one before.

From Viking metal helmets dating to 900 B.C.E. through the highly popular medieval helmets beginning in the 11th century, the popularity of this type of helmet waned once gunpowder was introduced in the 16th century.

Most armor of any kind had been discontinued for being too heavy and bulky, especially at a time when musket fire was the main threat.

That all changed with the resurgence of the metal army helmet during World War I when it became evident that head protection was once more needed.

The cloth hats and caps that the military wore initially offered no protection against the gunfire and shrapnel that came with modern war, so a new helmet made of steel was developed.

The British Brodie helmets or “tin hats” were rushed into production in 1915 and little more than a sheet of metal pressed into the shape of a bowl with a strap added, but they were effective.

As silly as they looked and garnering laughter from troops all over Europe as they were handed out, the metal bowl-like British Brodie and U.S. variant, the M1917, rimmed helmets resulted in a massive reduction in head injuries and fatalities on the battlefield.

The helmets were ugly and at 1.5 pounds each, they were heavy and uncomfortable, but they worked and reduced head injuries from 70% to only 22% of all wartime injuries.

The M1917 remained largely unchanged for many years until the U.S. entered World War II and it was decided that a better, more comfortable helmet was necessary.

The M1 helmet, with its more form-fitting shape, provided better protection to the back and sides of the head as well as better visibility with a closer brim.

Though twice as heavy as its predecessor, the M1 consisted of an outer shell or "steel pot" and an inner liner with adjustable webbing, a design that was better able to withstand bullets and shrapnel.

Known affectionately as the “steel pot,” the M1 is the most famous and recognizable of all combat service member uniform helmets known today, and the one that has been most depicted in Hollywood.

With a design that was successful for over 40 years, the M1 was copied by countries throughout the world and is still in production today in many places.

The U.S. Army has moved on to a more advanced version of the M1 in the K-Pot or Kevlar®-reinforced Personnel Armor System for Ground Troops or PASGT helmet.

This helmet was the first of many improved 21st-century helmet designs and offered an even better fit and greater ability to protect against bullets and impacts, all with the much lighter yet durable weight of Kevlar®.

Kevlar® is a synthetic heat-resistant synthetic fiber that is recognized for its high tensile strength as compared to its weight and tightly-spun fibers that give it 10 times the strength of steel so that when a bullet encounters it, these fibers will eventually catch the bullet and absorb its energy.

Kevlar® revolutionized the design of army helmets, leading the way to many newer models within the last two decades including the Advanced Combat Helmet or ACH in 2002, which was made from a combination of Kevlar® and Twaron ballistic fiber.

The new materials made it possible to add more padding and adjustability features without increasing weight, better visibility and hearing, and increase shock absorption.

With these important redesign features, the ACH is easily used with other equipment like eye protection, night vision, cameras, and audio headsets.

Helmets From ACH to ECH

Continuing on, the design of the ACH was further improved in the Enhanced Combat Helmet or ECH, a helmet made from ultra-high-molecular-weight polyethylene, which offers even greater protection and impact-resistant than Kevlar®.

In use since 2011, the ECH can withstand gunfire from the weapons currently being used in warfare today, making it a soldier’s most important piece of personal protection.

The technology does not stop with the ECH, as the newest issue combat helmet builds even further with that design in the creation of the Integrated Head Protection System or IHPS that offers advanced facial protection as well.

With its boltless design maxillo-facial protection module, the IHPS is the most advanced helmet system in use by any military today and a far cry from the crude bronze and steel helmets worn by the Vikings or medieval knights.

See Helmets at the Museum of the American G.I.

It is easy to see how head protection has continuously advanced over time in response to the changing weaponry and the ways in which battles have been fought.

Today, it is possible to see early helmets from WWI and WWII as well as more recent helmets on display in military museums like the Museum of the American G.I.

Come To Winterblitz 2023 at the Museum of the American G.I. on January 21!

Call To Get Your Tickets! 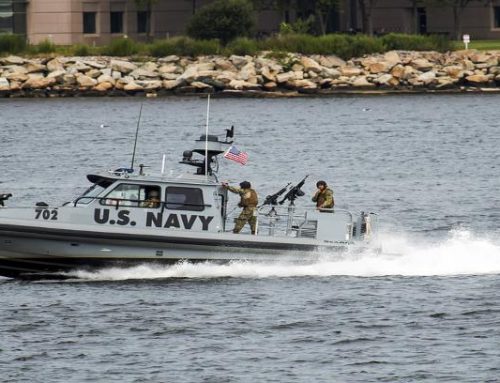 Why Does the U.S. Navy Have Two Birthdays?