Women of Resilience focuses on Brazos County’s women veterans of World War I and the contributions of women at home. It tells the stories of nine women who served as nurses and as yeoman during the war, including Maud Pigford of Bryan, one of only fourteen African American women who served as U.S. Navy yeomen; Lena Wright Perry who served in France and Irene Evans Claghorn who began her nursing career in 1918 and would complete three decades of service to Aggies as the superintendent of nurses at the College Hospital. On the homefront, the American Red Cross played a vital role in encouraging those at home to knit socks and mufflers, sew bedshirts, make comfort kits, and take nursing classes. In addition, women were raising money for liberty bonds, planting gardens, and preserving food through canning clubs. An important advocate of these efforts was the National Society Daughters of the American Revolution who distributed 44 bulletins nationwide on how women could help. Bryan’s William Scott Chapter NSDAR, organized in February 1916,  raised money, knitted articles, attended to sick soldiers on the A&M campus, and supported four French orphans.

This exhibit is an initiative of the Brazos County World War I Centennial Committee chaired by Dr. John Blair. It was prepared by Dr. Shawn B. Carlson, Curator of Collections and Exhibits at Star of the Republic Museum and Regent of La Villita Chapter NSDAR, Mary Shearer, Regent of William Scott Chapter NSDAR, and Pamela Marshall, Past Regent of Come & Take It Chapter NSDAR. 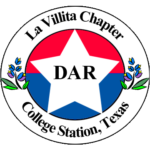