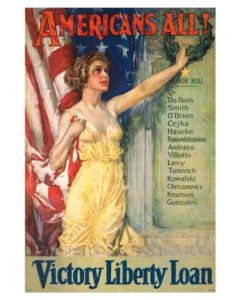 The photographic exhibit presents the contributions of 33 veterans of the First War from four ethnic groups (Czech, Polish, German and Italian) of the Brazos County who were first generation Americans.  Their families spoke the language of the “old country” and often these veterans were the first members of their family to learn English.  Each of these four groups lived primarily in ethnic communities spread geographically across the county, however the First War changed theirs lives.  They were exposed to many different cultures as they trained to fight the enemy in Europe.  They suffered, sacrificed and some gave their life in service to the country that had welcomed their parents with a promise of a better tomorrow.  By the end of the war, they were Americans all.

This exhibit is an initiative of the Brazos County World War I Centennial Committee. This exhibit was prepared by Dr. John Blair