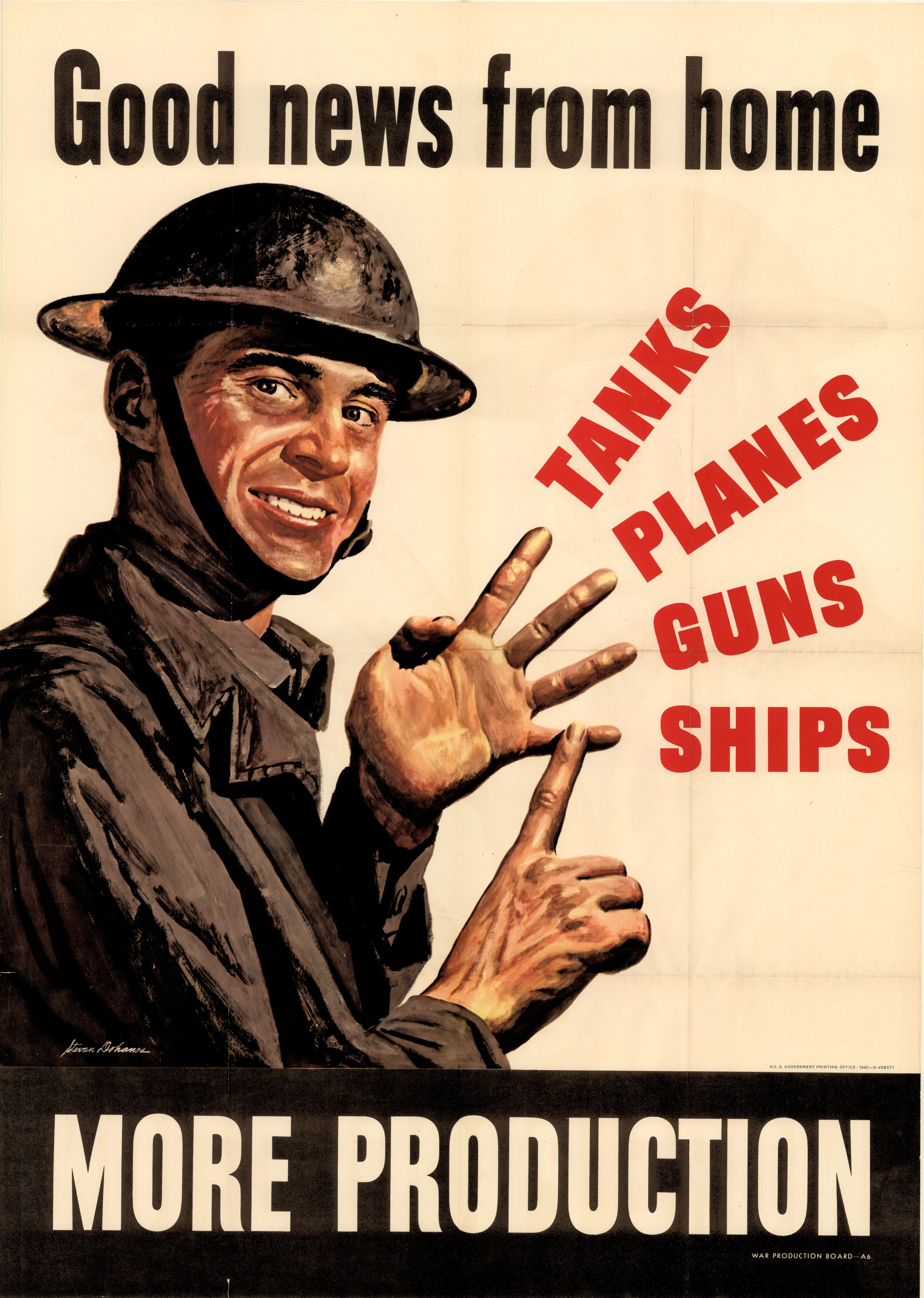 This 1942 poster was created and distributed by the War Production Board using artwork by Stevan Dohanos. This poster helped remind the public back home that their work to increase production in American factories and to conserve resources that were vital to the war effort were incredibly important to their loved ones serving overseas. In addition to fueling the war effort, American industry also reaped several benefits for itself and its new employees during this war. During the war 17 million new civilian jobs were created, industrial productivity increased by 96 percent, and corporate profits after taxes doubled. World War II was largely responsible for pulling the United States out of the Depression.

This World Cannot Exist Half Slave and Half Free

This 1942 poster makes use of a line from President Abraham Lincoln’s, then Senator Lincoln’s, famous House Divided Speech to draw a comparison between the enslaved American South and the parts of Europe under Nazi occupation. The artwork was created by John Phillip Falter and depicts a family cowering in the shadows as a man in uniform whips another person. The comparison was clear in this poster, making it a good tool to inspire Americans to work harder for freedom. 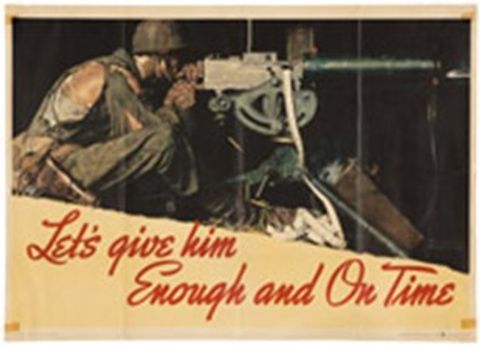 Let’s Give Him Enough and On Time

This World War II poster was produced in 1942 by Norman Rockwell and depicts an American soldier firing a heavy machine gun. Notice that his uniform is torn and that he is no longer firing actual ammo. This image was designed to help raise funds for the war effort, encourage people to join production lines, and to increase public awareness of the war effort. Due largely to the Great Depression, American industry was lulling before the United States entered World War II. However, industries already engaged in defense work expanded their operations while others, such as the automobile industry, transformed themselves completely. For example, in 1941, more than three million cars were manufactured in the United States. Only 139 more were made during the entire war. Instead, Chrysler made fuselages. General Motors made airplane engines, guns, trucks and tanks. Packard made Rolls-Royce engines for the British air force. The war effort totally transformed American industry and civilians were at the forefront of producing the equipment necessary to win the war.

You Make it Right…They’ll Make it Fight

This World War II poster was produced in 1942 by the War Production Board using artwork from Bernard Perlin, who later became famous for his pro-war art. The War Production Board was established as an agency of the US Government in 1942 via executive order of President Roosevelt. The WPB directed conversion of industries from peacetime work to war needs, allocated scarce materials, established priorities in the distribution of materials and services, and prohibited nonessential production. In addition to this, the WPB worked to encourage Americans, notably women, to take factory jobs that were vacated by men who had joined the service.