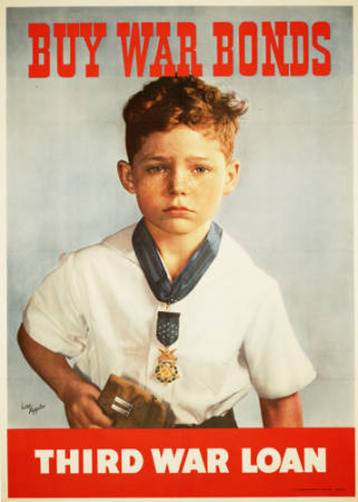 This World War II poster depicts a young boy holding what is, presumably, the service cap of his father, a Captain in the US Army. The boy also has the Army’s version of the Medal of Honor around his neck which, along with the tears in his eyes, imply that the boy’s father is no longer alive. Sentimental posters such as these encouraged Americans to purchase war bonds. This poster specifically addresses the Third War Loan, which President Roosevelt requested during a Fireside Chat in late 1943. With a fundraising goal of $15 billion, individual sales of $100 denomination series E bonds would need to double. The public’s effort surpassed the goal outlined by Roosevelt, reaching almost $19 billion by the drive’s close on October 2, 1943. Everyday citizens often purchased savings bonds while certificates of indebtedness and treasury notes were generally held by banks and corporations. 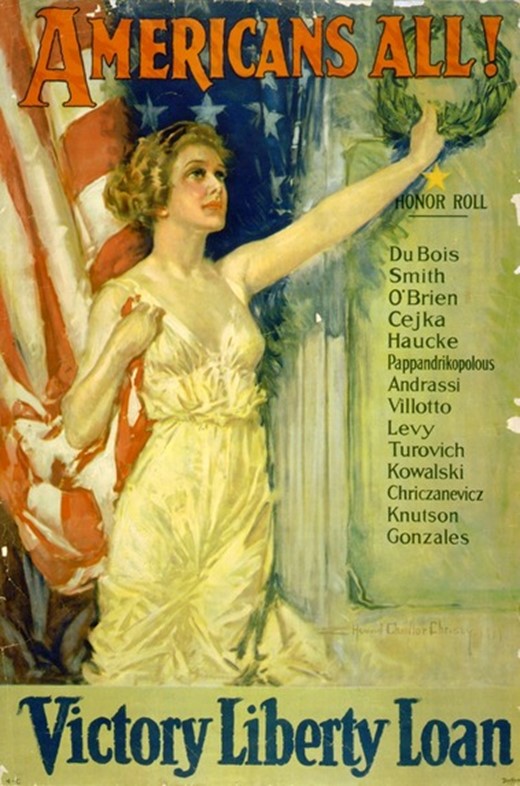 This 1919 poster depicts a female personification of America holding a wreath over an honor roll filled with last names from various ethnic groups. This poster was created to garner support for the Victory Liberty Loan, the fifth war bond issue of World War I. This campaign consisted of $4.5 billion of gold notes at 4.75% interest, which matured after four years but could be redeemed by the government after three. Exempt from all income taxes, they were also referred to as “the last of the series of five Liberty Loans.” 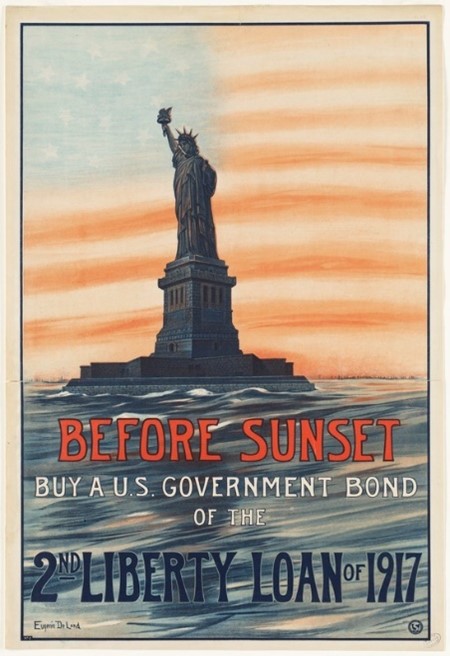 This 1917 poster encouraged the public to purchase bonds for the 2nd of an eventual five liberty loans of World War I. The 2nd Liberty Loan Act established a $15 billion aggregate limit on the amount of government bonds issued, allowing $3 billion more offered at 25 years at 4% interest, redeemable after 10 years. The amount of the loan totaled $3.8 billion with 9.4 million people purchasing bonds in the six week period it was open. 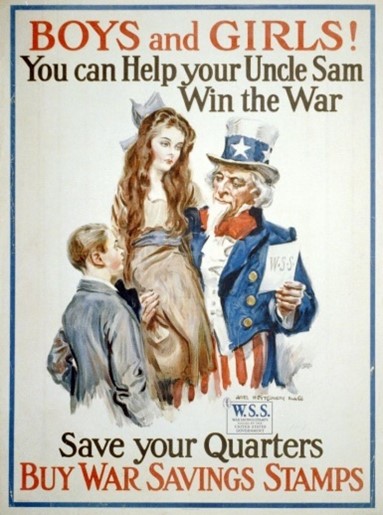 Boys and Girls! You Can Help Your Uncle Sam Win the War

This 1918 poster called upon the children of America to save spare change in order to purchase war savings stamps. Children were encouraged to contribute to the war effort throughout both World Wars, with other posters encouraging them to join scouting organizations, collect scrap metal, and do a host of other activities to support their nation.

This poster was created in 1918 using artwork from Howard Chandler Christy which depicts a personification of America guiding a Naval gun crew. This poster aimed to encourage the public to purchase bonds in support of the Fourth Liberty Loan. The Fourth Liberty Loan offered $6.9 billion in bonds at a rate of 4.25%. Fun fact: the Act of Congress which authorized the Liberty Bonds is still used today as the authority under which all US Treasury bonds are issued.

Goodbye, Dad! I’m Off to Fight for Old Glory

Publisher: Department of the Treasury

This poster was produced by the Department of the Treasury in 1917 to encourage Americans to purchase bonds for the Third Liberty Loan. By depicting a son leaving for war encouraging his father to purchase war bonds helped demonstrate the relationship between the bonds and the war effort.

Publisher: The US Government Printing Office

Georges Schreiber (1904-1977) commemorates the sinking of the USS Dorado submarine in this 1944 War Bonds poster entitled, Fire Away, for the Fifth War Loan. Schreiber sailed aboard the ship in the summer of 1943 and had a personal connection to the tragedy. USS Dorado (SS-248) was a Gato-class submarine. The USS Dorado sailed for the Panama Canal for use in the East Asia war effort. The submarine was sunk off the coast of Cuba due to a minefield left by a German-Nazi U Boat. This is an Original Vintage Poster; it is not a reproduction.