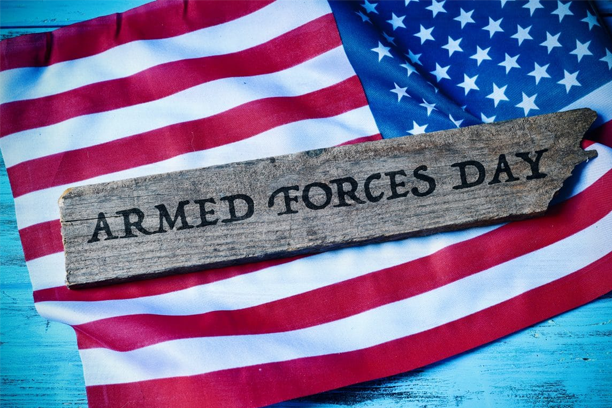 Armed Forces Day is a time to pay special tribute to the men and women of all branches of the military. Thank you to all our service members for your patriotic service to our great country!

Armed Forces Day is celebrated on the third Saturday in May. Established by President Harry Truman, it is a day to pay special tribute to the men and women of all branches of the United States Armed Forces. Truman led the effort to establish a holiday where citizens can unite and to honor our military heroes for their patriotic service in support of the United States. While there were originally single day celebrations for each branch of the military, Secretary of Defense Louis Johnson announced the creation of Armed Forces Day. Stemming from the unification of all military branches under the Department of Defense, this annual celebration now honors all branches during one solitary day.

The first official Armed Forces Day took place on May 20, 1950. This day played an essential part in educating society and expanding public knowledge of the military and the role they play in our communities. It was not only a means to honor those who have or currently serve but also a way to showcase its top of the line equipment and the abilities used to protect those in our country.

John F. Kennedy declared Armed Forces Day a national holiday in 1961. It has since been celebrated the third Saturday of May and is exhibited by parades, exercises, and receptions that highlight and honor America’s amazing military and all of its strength. Since this is not a federal holiday, many military bases and installations are available for public viewing for those who wish to partake in the celebration or learn about our country’s military.